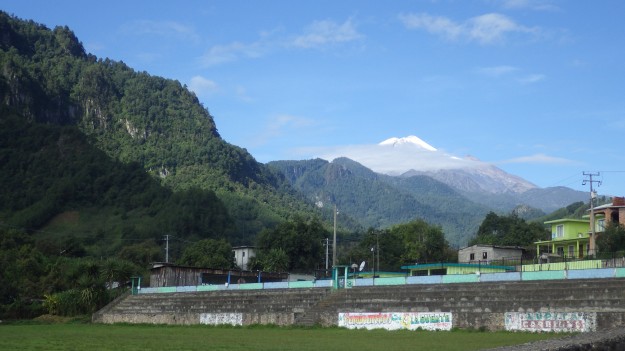 Pico de Orizaba looms large over the landscape of Veracruz State, Mexico. From this vantage  point we’re still 3000 m from the summit.

There are two main crops grown on the northern slopes of Pico de Orizaba, a dormant volcano and the highest mountain in Mexico*. Unsurprisingly, one is maize, the standard subsistence crop in this region. The other is the pine tree Pinus patula. 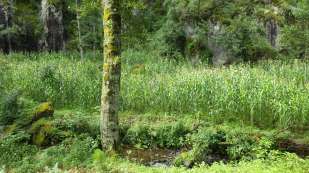 A maize field on the valley floor 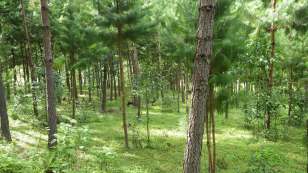 A developing plantation of Pinus patula. Here, close to the village, they also graze sheep beneath them.

We’ve spent two days this week getting to know the northern face of Pico de Orizaba, which is the side where the majority of coniferous species are found. As in so many parts of the world, our explorations are complicated because anywhere that’s accessible has been transformed by humans, which means that even if we can spot intact forests through the telescope, reaching them would be nigh-on impossible without a guide, climbing gear and a lot more time.

The first day was spent on the ridge tops, trying to get a view down into some of the valleys and find a promising route. This was a race against time as the cloud falls rapidly over the course of the day, shrouding everything in thick fog. Eventually we spotted some tall old-growth stands and reached a friendly village where they showed us the trail to reach them. We scouted a short way up the ridge but heavy rain put paid to any further adventures.

The next morning we set out to climb the narrow gorge which led to the forests we wanted to reach. On several occasions we hit waterfalls and had to turn back to climb around them. It also poured with rain for a large part of the day. Our determination was rewarded, however, when we finally emerged into some grand, full-stature forests of Pinus patula, mixed with some P. ayacahuite and Abies religiosa. It was a breathtaking sight and made the long climb worthwhile. 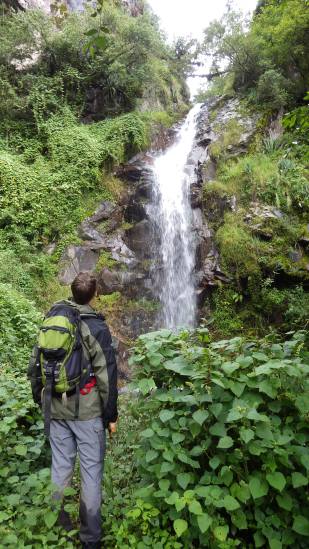 Hiker: “What a gorgeous waterfall!”. Forest ecologist: “How am I supposed to get up this gorge now?” 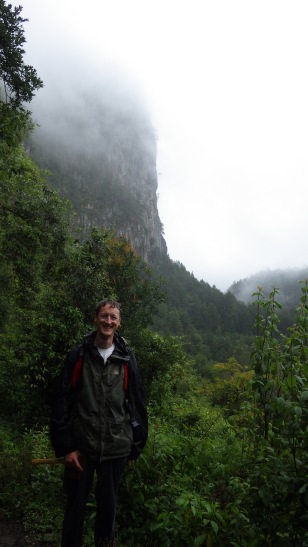 Bedraggled, but you can see the tall pines just upstream in the valley behind me.

We weren’t the first to reach them though. All the way, our trail had been pock-marked by the hooves of donkeys. It soon became apparent that what we had reached was not an isolated remnant of forest but the current front line of an ongoing, small-scale logging operation.

The dominant cottage industry in this region is the manufacture of low-grade crates and pallets, the kind that are used to transport fruit and vegetables. Many households are surrounded by mounds of sawdust; often someone (usually a woman) is sat outside knocking together an endless series of crates. The improvised sawmill providing the planks is around the back. Their dominant raw material is Pinus patula. 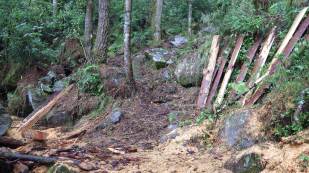 Even in this remote location, the chainsaws get here first. 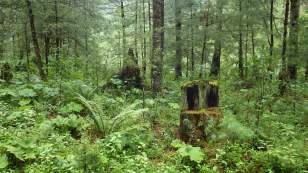 The forest remains but the giants are being lost. 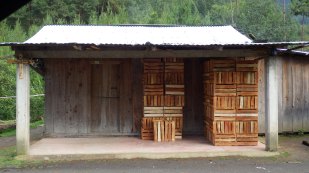 The end product: stacks of crates. 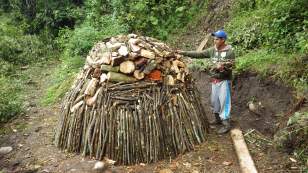 Charcoal production is another cause of forest loss.

Which brings me back to my comment at the start of the post about farming Pinus patula. Government grants have provided landowners in this area with thousands of seedlings of Pinus patula, which are now being planted all through the valleys. Men can be found peppered across the slopes, clearing the brash and shrubs away in order to plant yet more. The scheme has obviously been running for several decades because, in a few places, the trees are now reaching harvestable sizes.

I will confess to having mixed feelings about this. There is no doubt that the main driver of loss of these magnificent ancient forests has been the manufacture of cheap pine products. On the other hand they are, in some sense, being replaced, which means that the activity could in the longer-term become sustainable. Farmers are at least planting a native tree species, and one which clearly belongs in these valleys. It will act to reduce erosion, prevent flooding, and although not as good as old-growth stands, plantations will still provide habitat for many of the species that formerly inhabited the forests. The waste products — bark and other off-cuts — can be used as fuelwood to reduce their dependence on other sources such as charcoal. Finally, making crates provides a stable income for communities who have lived on and farmed these slopes for generations.

This landscape is so rugged, the topography so steep, that there will always remain some places where the native vegetation persists, out of reach of both donkey and chainsaw. These may only be small fragments but they are crucial in providing continuity, seed sources and safe redoubts from the encroachment of civilisation. I may never reach them or survey them, but I am glad to see them from my telescope, and know that they still exist. 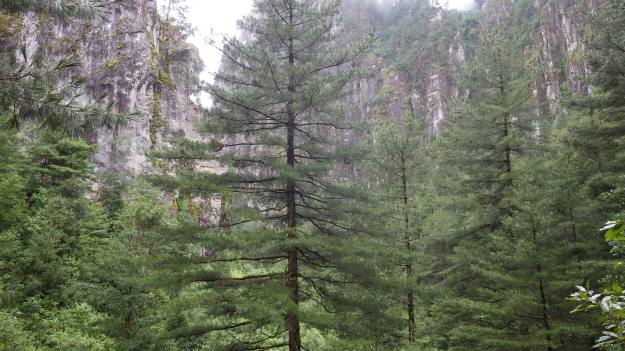 This beautiful forest is under threat. But somewhere in these mountains others like it will remain, simply by virtue of their inaccessibility.

UPDATE: in between writing and posting this piece, the aftermath of Storm Earl led to multiple deaths in the area around Coscomatepec, where we were staying, due to flooding and landslides. It’s worth remembering that behind the headline figure of fatalities is always a larger story of survivors who have lost houses, crops, livestock; many villages will have been cut off. Mexico is a beautiful country but one with great disparities in wealth, and in this tragedy the heaviest burden will fall on those least able to cope.

* Its total height is 5,636 m, but most striking is its prominence, rising 4,922 m above the surrounding landscape. It really does stick out.