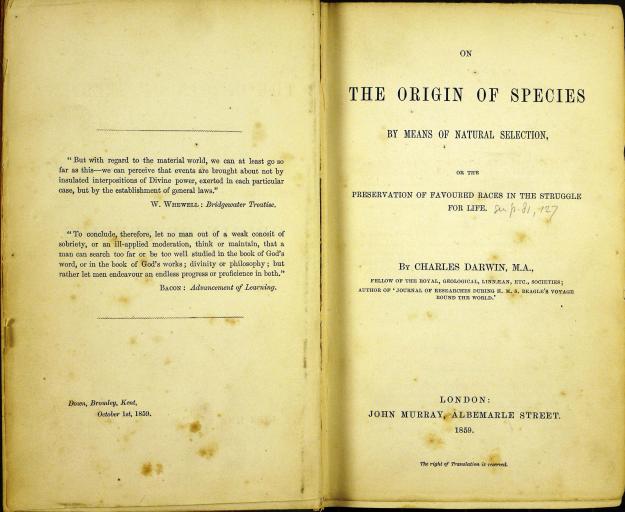 The opening pages of Darwin’s classic text in its first edition as held by the library of St John’s College, Cambridge.

A number of years ago on a UK radio show there was a flurry of attention when Richard Dawkins, under pressure from a religious interviewer, was unable to recall the full title of Darwin’s most famous book*. This was perceived as a flaw in his authority as an evolutionary biologist. How could he claim to support evolution if he couldn’t even name the book which launched the theory?

There was a prompt backlash to this line of argument from scientists who pointed out that we don’t have sacred texts in science. Unlike religions which fixate upon a single original source**, we recognise those who made contributions to the development of our field but don’t treat them as inviolable truth. Darwin, like all scientists, got some things wrong, didn’t quite manage to figure out some other problems, and occasionally changed his mind. None of this undermines his brilliance; the overwhelming majority of his ideas have stood the test of time, and given the resources and knowledge he had available to him (remembering that it was another century until we understood the structure of DNA), his achievement was astonishing.

Confession time: I haven’t read On the Origin. Maybe I will one day, but right now it’s not on my very long reading list.

There are many good reasons for reading On the Origin, none of which I need to be told. By all accounts it’s a fascinating, well-written and detailed argument from first principles for the centrality of natural selection in evolution. As a historical document and inspiration for the entire field of biology its importance is unquestionable. I’m certain that Richard Dawkins has read it, even if he didn’t memorise the title.

None of this means that I have to read it. The fundamental insight has been affirmed, repeated and strengthened by over 150 years of scientific study and publication. Even though I used to be a creationist, it didn’t take reading Darwin to change my mind***. What we know now makes a modern account more convincing than a Victorian naturalist could ever have managed.

An even more embarrassing confession is that I haven’t read The Theory of Island Biogeography****. This admission is likely to provoke horror in anyone from that generation of ecologists (my own lecturers) who remember the seismic impact that MacArthur & Wilson’s 1967 book had on the field. It defined the direction of enquiry in many areas of ecology for decades afterwards and effectively founded the scientific discipline of conservation biology. Some of their ideas turned out to be flawed, but the majority of ecologists still view the central model as effectively proven.

I’m not one of them. Yes, I apparently fall among the minority of ecologists, albeit led by some pretty influential voices, who view the model as so partial and incomplete as to lack predictive value in the real world (I’m not going to lay out my argument here, I’ve done that before). That I’ve reached this decision without reading the original book doesn’t perturb me in the slightest. In the same way as I’m confident that I can understand evolutionary theory without reading Darwin, I’ve read enough accounts of the Equilibrium Model of Island Biogeography (and taught it to undergraduates) that it’s not as if going back to the original source will change my mind.

If this upsets you then consider whether you’re happy to agree with the majority of evolutionary biologists that Lamarck’s model of inheritance was wrong without without bothering to read Lamarck (or his later advocate Lysenko). Lamarck made many great contributions to science; this wasn’t among them. For similar reasons I’m happy to make judgements on Haeckel’s embryological model of evolution (rejected), Wegener’s theory of plate tectonics (accepted), or Hubbell’s neutral theory (ambivalent), all without reading the original books.

What have I actually read then? Among the great classics of our field I’m pleased to have gone through a large number of Wallace’s original works, which were contemporaneous to Darwin, and Humboldt’s Essay on the Geography of Plants (1807). I can strongly recommend them. But they didn’t change my mind about anything. It was enjoyable to go back to the original sources, and by the end I was even more impressed by the authors’ achievements than before, but my understanding of the world remained unaltered. For that reason I wouldn’t ever claim that everyone should read them.

There are, however, a number of books which have changed my mind or radically reorganised my understanding of the world. These include Chase & Leibold’s 2003 book about niches or Whittaker & Fernandez-Palacios on islands. Without having read them I wouldn’t hold the opinions that I do today. I’m glad that I placed those higher on my reading list than On the Origin. But that certainly doesn’t make them essential reading for everyone.

We all follow our own intellectual journeys through science and there is no one true path. For this reason I’m always sceptical of attempts to set essential reading lists, such as the 100 papers every ecologist needs to read, which I and others disagreed with more on principle than content. So yes, if you like, you can think less of me for the reading that I haven’t done. But my guess is that many people who read this post will be feeling a quiet reassurance that it’s not just them, and that it’s nothing to be ashamed about.

* It is, of course, the barely memorable “On the Origin of Species by Means of Natural Selection or the Preservation of Favoured Races in the Struggle for Life.”

** This in itself is baffling given that sacred texts have their own complex histories of assembly from multiple sources. Most modern Christians don’t dwell on the fact that the issue of which books to include in the Bible was so contentious, especially for the Old Testament, and some traditions persist with quite different Bibles. Why include Daniel but not Enoch? Then there’s deciding which version should be seen as definitive, and whose translation… it’s not as simple as picking the one true book.

*** Notably a dominant theme in creationist critiques of evolution is to pick away at perceived errors or inconsistencies in Darwin’s writings on the assumption that undermining its originator will unravel the whole enterprise of modern biology.

**** And this from a former book reviews editor of the journal Frontiers of Biogeography. They’ll be throwing me out of the Irritable Biogeography Society next.

2 thoughts on “Books I haven’t read”