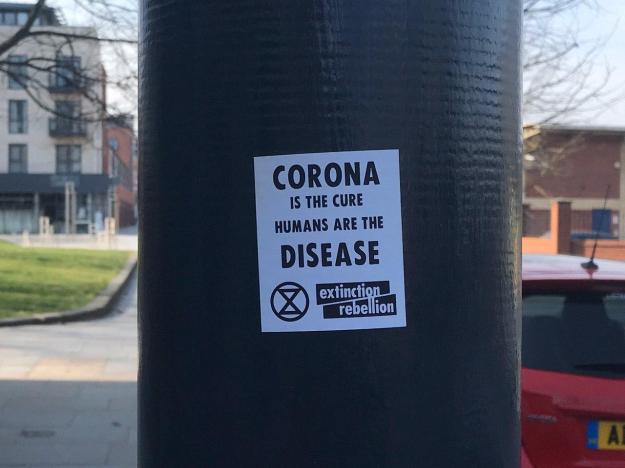 There is no excuse for this. Image taken from the Twitter feed of XR East (@xr_east)*. Note that Extinction Rebellion UK have disavowed both this group and the sentiments expressed in the post. Similar opinions have been circulating on social media for some time though.

I’m angry. I was reluctant to write anything on this blog about COVID-19, pandemics or epidemiology, given that none of them are among my specialisms*. But lately I’ve been appalled by a subset of ecologists and environmental campaigners — admittedly small — who have used this crisis to score points for their personal obsessions.

This is not to criticise those who seek positive messages to cling onto when there is so much to mourn or fear. Some of this desire is misdirected, including numerous stories of nature returning to areas which have seen dramatic reductions in human activity. Whether it’s drunk elephants in Chinese villages or dolphins in Venice, these have usually turned out to be false reports. Does it matter that many people share stories that are quickly disproven if they offer a brief cheering distraction? Perhaps not so much. There are more dangerous lies out there.

Yet linked to many of these stories is an agenda, sometimes implicit, other times actively advanced, which has at its core a desire to show that something good has come of the pandemic. Few would say so with quite that lack of subtlety, but there is no other way to interpret many of the articles on declines in air pollution, clear skies or the potential for advancing a green agenda during the anticipated recovery. I’m more sympathetic to those who point out that the international response shows that we have the ability to pull together for the collective good that could be harnessed again. There may be opportunities to be taken once we can see the light at the end of the tunnel, but that still seems a long way off.

Others are even less subtle, for example the assertion by the European Agroforestry Federation that all this wouldn’t have happened if we’d had more agroforestry. Even if true, and despite being a longstanding advocate of agroforestry I’d struggle to make an evidence-based case for it***, now is surely not the time.

The most pernicious narrative, one which lurks in the fringes of the Deep Green movement and other more mainstream environmentalist groups, is that anything that reduces human populations and activities can only be a good thing for the environment. I have even seen it argued (and I refuse to link to it) that COVID-19 is an expression of Gaia immunity, the Earth fighting back against the infestation of humans that is taking it out of some mythical balance****. The refrain ‘we are the virus’ has been expressed repeatedly on social media. The sentiment at the top of this article is not a isolated incident. Nor is it a new idea; in 1988 Prince Philip told a German interviewer that he was ‘tempted to ask for reincarnation as a particularly deadly virus’ so as to aid in population control. Yes, he really did say that.

To believe that a catastrophe causing widespread mortality is somehow beneficial is simple eco-fascism. Privileged people in the Global North, living in splendid isolation whilst delighting (even indirectly) in the death, privation and suffering of others, is not morally acceptable on any grounds. There is no positive side to a pandemic.

There are two strands to eco-fascism. One has a long history in the belief that restricted national resources compel populations to resist immigration in the name of supposed sustainability. This narrative has already inspired acts of terrorism, but also been made in more mainstream settings by France’s National Rally (Rassemblement national) among others. Most reasonable, compassionate people would disavow this set of arguments.

The other narrative, however, holds that any reduction in human population can only help the natural world. This is sometimes expressed as the suggestion that not having (so many) children is the best way of combating climate change, an argument which is both logically and morally suspect. Any case for global population control always ends up being anti-female, racist and ultimately anti-human. Even if we might agree on a ‘sustainable’ human population level — and that’s not an easy figure to decide upon — the process of reaching it is unconscionable by any means, and certainly with the speed required for it to be an effective measure. As Jenny Turner put it, “How can a planet lose seven or eight billion humans… without events of indiscriminate devastation? When people start thinking about getting rid of other people, which sorts of people does history suggest are usually got rid of first?”

On this point, in which countries do you expect the death rate from COVID-19 to be the highest? It will almost certainly be in the Global South where access to medical care, nutrition and government support is most lacking. They are not the ones who bear the greatest responsibility for global change, and once again they will carry the heaviest burden. This pandemic is first and foremost a tragedy. It will not in itself be of any lasting benefit to the environment.

We are rightly offended when politicians use disasters to advance their own partisan agendas. As scientists, including ecologists, we need to step back from the campaigns that are usually at the forefront of our minds and accept that this situation is a distinct crisis of its own. Yes climate change remains a pressing issue; yes extinctions continue apace; yes the international wildlife trade is abhorrent. But these are separate problems which the world’s attention will return to again. For now simple compassion and decency requires us to stand back and accept that for once it isn’t about us.

* I suspect (and rather hope) that the post will be taken down, but here’s the evidence. There is a dispute going on about whether this represents a genuine faction of XR, or ‘infiltrators’, which are difficult for an autonomous movement with no central leadership to protect themselves against. It wouldn’t be the first time that someone associated with XR has said something offensive though. For the record, I continue to be a strong supporter of XR and their core principles.

** Not that this has stopped quite a number of people.

*** The only relevant project I’ve been involved with, on mosquito-borne diseases in Northern Thailand, actually implicated orchard expansion as a likely cause of greater risk of infection. But this is a complicated subject and no single study can tell the whole story, particularly one which wasn’t designed to test that hypothesis.

***** I don’t have time here to explain in detail why Gaia theory is nonsense and has been rejected by the majority of ecologists. For more see pages 175–176 in my textbook and the papers it refers to. I’m also writing another book about it.