The skyline of Nottingham looks nothing like that at all.

I’m spending this week at the joint meeting of the European Society for Mathematical and Theoretical Biology and the Society for Mathematical Biology. There are around 850 registered delegates, and it lasts for five days, so it’s a pretty big one. It’s also not home territory for me. Although I’ve drifted into theoretical ecology over the last few years, and increasingly collaborate with mathematicians, my foundation is still very much in quantitative field ecology. I definitely feel like an imposter.

Below are ten personal observations on attending a conference that’s a long way outside my own area. None of these are specific to ECMTB, nor am I qualified to comment on maths conferences in general. It’s also a little mixed up by being on my own campus here at the University of Nottingham, which does tend to change the experience of a meeting.

What’s the collective noun for mathematicians — an aggregation? Swarm? Piss-up?

1. No one knows you so they don’t talk to you. This is particularly striking having just come back from ATBC in Montpellier. I’ve been going to ATBC meetings since 2003. Walking into coffee, or the poster room, or even on the streets outside the venue, it was impossible not to bump into someone I knew. This has a snowball effect as these people then introduce you to others, who you meet again the following year, and before long you become part of a community. Here, standing in the lunch queue amongst hundreds of people, looking around and seeing no-one I know… that was a little unsettling.*

It’s not quite the same as going to a conference as a grad student (I do still remember). Back then, although I didn’t know many people, I was part of a cohort of other students who gravitated towards one another, often assisted by early-career events, and who later became the group of awesome colleagues I have today. Now that I’m mid-career the social groups have already formed. I’m acutely aware that my own regular conference cliques must appear similarly exclusive, even though we’re not deliberately so.

2. Despite the above, one thing no-one can ever accuse me of is shyness. Not knowing someone doesn’t mean I won’t just walk up and talk to them regardless, and everyone I’ve spoken to has been warm and friendly. But I’ve come across another problem, which is that my usual elevator pitch doesn’t work. Put me in a room with an ecologist and I know how to describe what I do clearly and concisely; in no time we will find common ground. My attempts to do the same here have met with confusion, largely because we define our problems in different terms and I’m not good at expressing my research in language that a mathematician can relate to and find relevant. I also often struggle to get my head round what they’re telling me about their own work. I’ll keep trying though.

3. Connected to this is that mathematicians ask hard questions. They’re probably not tough for a mathematician, but to me they’re challenging and unpredictable. I can usually anticipate what another ecologist might ask me, and I’ve often thought about the answer myself. What makes mathematical questions difficult is that they come from an entirely different perspective and way of thinking about systems. This is great of course, and one of the main reasons that I’m here.

4. All this means that it’s hard to sell your research as an outsider. Without wanting to sound arrogant, I’m confident at BES that if I have a talk scheduled, people will come. Some in my specific area will make a special effort. Here there were a reasonable number of people in the room for my talk, but I can’t pretend that I was the draw as it was in the middle of a long session in between established speakers. Was this because it’s a fringe topic, because I’m an imposter, or because I’m not familiar with how to pitch my title and abstract to make them enticing for this audience? I suspect a bit of all three.** On the other hand, it was refreshing to talk to a room of complete strangers with no expectations or preconceptions.

5. A pattern I’m picking up from the conversations I’ve had so far is that the whole conceptual structure of the field is different. My guess is that mathematicians self-identify with a particular field or approach, which can be applied and tested in a variety of contexts. Ecologists, on the other hand, fix on a particular system or problem and bring in a portfolio of methods that will help them to study and understand it. I find this really invigorating: it’s forcing me to rethink the links between areas that I don’t normally associate with one another, and exposing me to research I wouldn’t otherwise see.

6. This is held back, alas, by the realisation that I don’t even know the basics. In a number of talks, the speaker has glossed over some logical step or series of equations as being commonly understood by everyone in the room. Often that leaves me floundering, although I’m picking up a wish-list of things I need to learn. Are ecology talks as impenetrable to outsiders for the same reason? When we flash past a slide on Janzen-Connell processes or SARs, do we lose a significant fraction of the audience?

7. One real difference in behaviour I’ve noticed is that mathematicians interrupt talks — and the speakers don’t seem to mind at all! I’ve seen several talks stopped while someone asks for clarification of a particular parameter or equation. This is unheard of in ecology, but I think it’s great, because on most occasions I didn’t understand it either.

8. Ecologists (and biologists in general) are often insecure about their grasp on mathematics. Yet I’ve heard a similar sentiment expressed in several talks here; theoretical ecologists worry about their lack of field experience. To me this is very reassuring, and makes me feel more comfortable about being out of place. We can all help one another.

9. Call this a loss of attention span on my part, but I don’t like 15-minute talks any more (and 25+5 is even worse). Ten years ago the 15+5 model was standard in ecology, but the growing size of the meetings has meant that we now run on 12+3 as standard. This not only allows more to be packed in (or fewer parallel sessions) but forces effective speakers to focus rigorously on their core points. With 15 minutes there’s room to digress, and for the audience’s mind to wander. Even I was getting bored of the sound of my own voice by the end.*** If I did have one specific suggestion for the organisers it would be to change this; many in BES resisted at first but now I don’t want to go back.

10. I’m not attributing any of the above comments to inherent differences between mathematicians and ecologists, and that’s not a deliberate choice on my part, just that I don’t see any evidence of ‘two cultures’. The dynamics are exactly the same as any other conference I’ve attended: people gather and talk excitedly about research, ask interested and penetrating questions of speakers, greet old friends with delight… it’s all very familiar****. There’s no need for me to trot out any cliches about mathematicians because, so far as I can see, none of them are true. Everyone has been very welcoming and genuinely pleased to talk. Maybe I’ll come back next time and know a few more people… 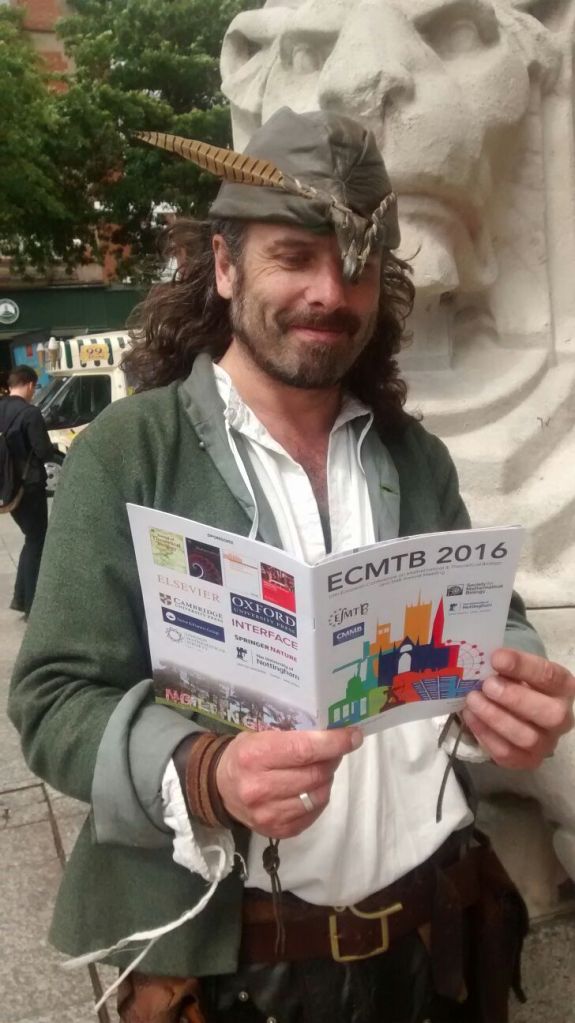 Like me, Robin Hood is more at home in the forest than at a maths conference. Posted by @ECMTB2016

* The flip side of being unknown here myself is that I also don’t really have a clue who I should be speaking to. I’ve been taking a haphazard approach so far.

** That said, I’m very grateful to the organisers for giving me a slot in a session on the very first day, despite being an outsider. Many thanks :o) The talk seemed to go fine, though my confidence largely stemmed from having already published most of it, and presented it before at the BES in Lille. It was a safe bet.

*** Please insert sarcastic rejoinders in the comments. I know I’m a bigmouth.

**** OK, there are some differences. For one, there’s much less booze involved. I’m told by people who work in catering that the worst conferences are ecologists, geologists and archaeologists. There’s something about academics who spend large amounts of time in remote locations with nothing to do other than drink. Also, mathematicians are better dressed than ecologists. I’ve yet to see any sandals or — that mainstay of ecology meetings — the barefoot speaker. This is A Good Thing.