For the next five weeks I’m based in Puebla, Mexico. It’s a beautiful location: an historic city (the centre is a World Heritage Site) surrounded by spectacular archaeological sites and with a horizon dominated by snow-capped volcanoes*. There’s not much time for tourism though; we have a packed itinerary.

The first three weeks will be taken up with a single mission: collecting trait data from as many Mexican coniferous species as we can find. Hence the nickname of the trip, Pinaceae Go!** Because finding real trees is way more fun than hunting virtual creatures on your mobile phone. We also stand a chance of spotting the legendary volcano rabbit, which sounds as though it should be a Pokémon.

The Pinaceae Go team — myself, ecologist Dr Sarah Pierce and PhD student Libertad Sanchez-Presa. And, in the background, the real object of interest: Abies religiosa on La Malinche volcano.

Why Mexico? The reason is that the country is the centre of global diversity of conifers. Of the 120 recognised species of Pinus worldwide,  49 occur in Mexico***. The country also holds 7 of the 18 species of Cupressus, 8 of 48 species of Abies, one each of the four species of Pseudotsuga and Calocedrus, 3 of the 38 species of Picea and 20 of the 68 species of Juniperus. That’s quite a haul. Of those seven important genera, Mexico alone contains 30% of  global species richness.

So what? There are other centres of tree diversity all around the world. Why is this one in Mexico special?

The reason this particular hotspot baffles me is that current opinion in forest ecology suggests that conifers can’t reach high levels of species richness. This is because classical theory argues that conifers don’t have the flexibility of traits and growth forms available to broad-leaved trees. Conifers all have roughly similar branching patterns, leaves**** and wood. It’s relatively easy to understand how multiple broad-leaved tree species can coexist by having distinctive traits to reduce the degree of competition among them. Such a wide range of variation simply doesn’t exist in conifers.

This account may appear compelling to a temperate ecologist, who will know of the vast boreal forests containing only a couple of coniferous tree species. It falls apart when faced with the montane forests of Mexico.

To illustrate the scale of the problem, our very first sampling location provided a perfect example. We drove along a dirt track up the side of the famous active volcano Popocatépetl, stopping at around 3000 m altitude to have a look around the forests. It didn’t take long to start building our database. Within 100 m of the road we were able to sample five species of Pinus, one Abies and a Cupressus. We weren’t even trying very hard; this was an introductory walk to test our methods rather than a systematic sample. 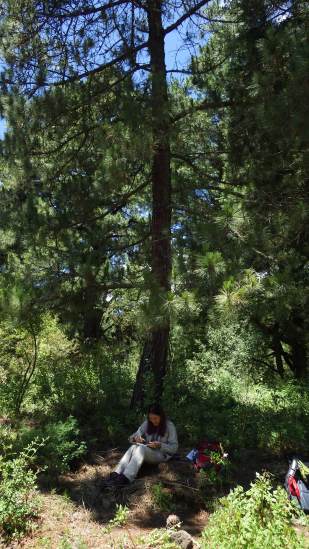 Our pole saw didn’t arrive on time so Sarah improvises with her ‘stick of power’. She insists on calling it that.

Ultimately the questions Libertad would like to answer include:

We’re only at the beginning of this project; Libertad is still in the first year of her PhD and this is the first fieldwork we’ve done. A large amount of trait data is in the literature already, along with the Mexican national forest survey. We’ve been processing all this information over the last few months. Our aim for this trip is to supplement this with missing species and new locations. Gotta catch them all…

* Your view of snow-capped volcanoes may depend upon air quality.

** Conifers include the pines (Pinaceae), hence the trip nickname. Conifer Go would have been more accurate, but wouldn’t have sounded as good.

*** Let’s not get into arguments over taxonomy. We’re following the opinion of Aljos Farjon, generally acknowledged as the world expert on conifer systematics, and bane of splitters.

*** Yes, they are still leaves, even if they are colloquially referred to as needles.